Commemorating the work of Shaun Traynor who died March 23rd 2021 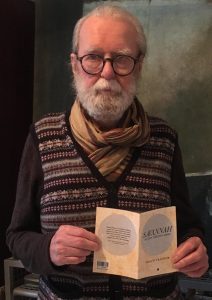 We were honoured that Shaun Traynor approached us to publish what, in the end, proved to be his last book. “Savannah and her moons”, a collection of 13 very short poems for each moon of the year, was dedicated to his granddaughter. It had all the qualities of both the poet and person we had come to recognize from all-too brief acquaintance with him.

First, the poet. The open-heartedness of Shaun’s writing stood him alongside his Irish contemporaries – Heany, Mahon, Longley – with the difference that he was a determinedly urban poet. The experience of moving from the North of Ireland to London, with all the attendant complex history that walks with any Irish person moving to Britain, wrote its way into his poems. Yet he was not in any way bound by that particularity but rather it served as the ground on which connections to others were built.

These qualities are all present in his three collections, “The hardening ground”, “Images in winter” and “Van Gogh in Brixton”. In “Shakespeare’s last drink”, Shaun told the story of a fellow-poet’s last hours in the good company of friends and companions in the craft of writing.

Last, the person. We met over food and red wine. We talked Ireland and poetry and books. We agreed that an evening in a good pub was in order. But then the world and all that was in it intervened.

Burslem’s Barewall is a jewel of a gallery in the heart of the Potteries. Championing the artists of Stoke on Trent from the magnificent, late Arthur Berry of the Northern School through to small local craft producers. There is something for everyone here this Christmas and beyond! Learn more about them here.

We offer a range of courses based on interesting topics and literature classics.

Please see below the latest from our series of Riversmeet Monologues. For more information, visit our productions page.